When the GTS made its first global appearance in the late 2000s it was fitted with a naturally aspirated 4.8-litre V8 but was shortly replaced in favour of a twin-turbocharged V6. The race for power between these premium brands has however resulted in the return of the V8, but this time in 4.0-litre twin-turbo guise. It’s a 338kW chunk of beauty that offers up 620Nm of torque. Power is sent to all four wheels via an 8-speed torque converter automatic gearbox sourced from ZF. To help aid with efficiency the engine features cylinder deactivation, which shuts down one bank of cylinders when there is a low demand for power. Now Porsche claims around 11.4l/100km and while that may be achievable I, unfortunately, didn’t come close to that figure, because I was in the Western Cape with a high-performance Porsche.

This combination will see you hit 100km/h in around 4.5 seconds with the optional Sports Chrono package as fitted to my test unit. It is however the sound that this engine makes which really stirs the soul. It starts off deep then begins to swell as the revs climb, when you flick the paddle shifter mounted behind the steering wheel it crackles, burbles and bangs into the next gear, that relentless torque propelling you further and faster down the road.

There is however more to the GTS than just the engine. It’s how it delivers everything that is on offer so effortlessly and in a precise and balanced manner. Like a plate of food put together by a culinary master, every element is there to compliment the other.

The main philosophy behind the GTS is that it needs to be the sportiest one in the range, the one that is designed for people who look for more than just getting from A to B. One of the first things that I noticed when I got behind the wheel is that this Cayenne GTS feels alive, it fees agile and actually quite light by SUV standards and that’s quite incredible as it weighs around 2 200kgs.

Point its nose at a mountain pass and things really start to makes sense, the various flavours all come together. The cars steel-spring suspension has been lowered by 20 millimetres to better the centre of gravity. Other elements have also been added to better the experience when the mood takes you. Items such as Porsche Active Suspension Management (PASM) has been fitted which lets the car firm up or loosen depending on the driving conditions. The Porsche Torque Vectoring Plus (PTV Plus) system also features as standard which can brake the inside rear wheel to help the car rotate better through the corners.

Various driving modes also let you control how your Cayenne GTS behaves. A rotary dial on the steering wheel lets you choose between Normal, Sport, Sport+ and Individual. Each setting adjusts the cars throttle mapping, suspension and steering setup accordingly. Depress the little button in the centre of the rotary dial and you get an overboost or how Porsche calls it ‘Push to Pass’ function for twenty seconds.

While not the biggest fan of these coupe SUV’s I can confirm that Porsche has nailed the styling on their Cayenne Coupe offering. It’s uncluttered, easy on the eyes with just enough aggression. Some offerings tend to have very busy designs (here’s talking about you BMW with your X6). I also like the electronically adjustable rear spoiler fitted to the rear of the Cayenne Coupe. Other GTS specific elements include tinted LED headlights, GTS badging and loads of black accents on the bumpers and around the windows.

Now you might be looking at the rear of the Cayenne coupe and thinking to yourself that the lowered roofline means less headroom for rear passengers. Porsche engineers thought about that very issue and thus implemented one of the simplest solutions; they lowered the rear seat by 30mm to offset the sloping roofline. The boot can swallow around 625-litres of luggage, about 140-litres less than the standard SUV though.

The interior is equally as un-fussed as the exterior with a neat layout. One of the highlights is the 12.5 inch Porsche Communication Management (PCM) system which offers wireless Apple CarPay as well as the ability to adjust various other functions. The system is easy to navigate and visually appealing. Another standout for me is the semi-digital instrument cluster. A traditional tachometer is flanked by two screens, one handles speed and trip information while the other displays a navigation map and other various performance data.

After all, was said and done I reflected on my time with the Cayenne GTS. Personally, I would opt for the standard SUV but either way, the GTS offers a perfect balance between everyday usability and sports car performance. It is something that you can whisk away on a long trip or take to blast along your favourite stretch of road. It’s engaging, enticing and rewarding to drive but the thing that put the biggest smile on my face was that engine. In a world so focused on electrification, hybridization and downsizing here we are, with a big V8 and a couple of turbochargers. It’s perfection… 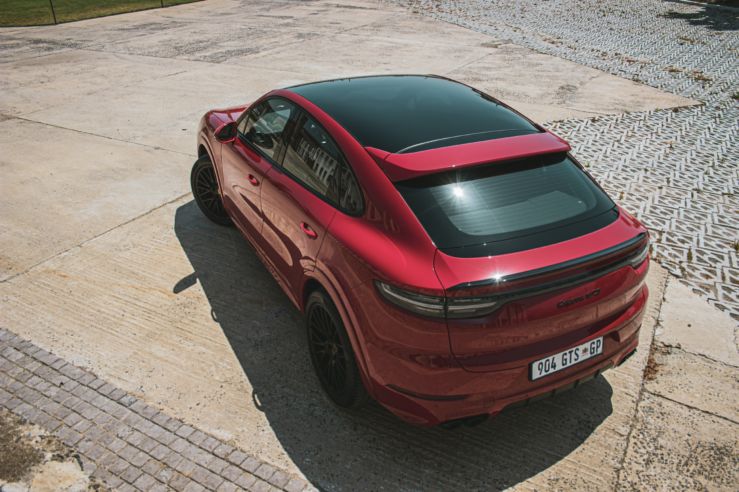