Much like some German Premium manufacturers, Volvo’s have been associated with a much older generation and Volvo successfully changed this with the introduction of the V40 a few years back.

To carry on with that change in perception, their vehicles have become more modern and edgy in design with the likes of the all new XC90 and the strikingly gorgeous S90.

With the XC60 and XC90 being the only offerings in the SUV category, there was a gap in the compact SUV segment for Volvo where the likes of Audi, BMW and Mercedes are playing hard with the Q3, X1 and GLA models respectively.  It only makes sense that Volvo, aiming at these premium car makers, join the party with their own offering.

That offering is in the form of the quirky yet not unpleasant-to-look-at Volvo XC40.  A compact SUV with oodles of stuff to fall in love with.  In fact, people fell in love with the car so quickly that the initial shipment (around 300 units) completely sold out before they even landed on SA soil.

Starting at a very competitive R486,500 you will be able to jump into the XC40 T3 Manual delivering 115kW from it’s 1.5 Turbo motor powering the front wheels.  You also have a D4 diesel engine delivering 140kW and 400Nm and the range-topping T5 2.0 turbocharged petrol offloading 185kW, both engines driving all four wheels.  The D4 and T5 variants are only available with the superb 8-speed Geartronic automatic gearbox, while the T3 is only available with a 6-speed manual at this stage with the 8-speed Geartronic arriving at a later date.  There are various trim levels available including Momentum, Inscription and the superbly beautiful R-Design.

I was quite happy to be handed the keys to the top of the range D4 diesel with just about every conceivable bell and whistle, including the R-Design package, panoramic sunroof, 360° camera with front + rear PDC, active damping suspension, Harmon/Kardon sound system and corner bending LED headlights.  This tips the price to around the R734,000 mark. 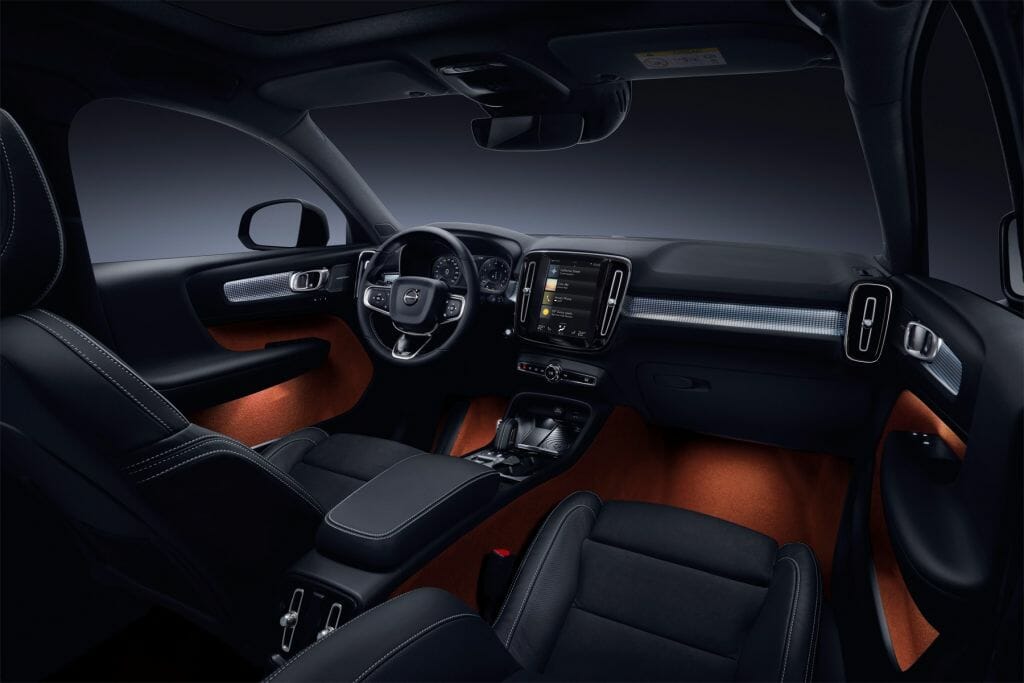 In terms of comfort, the D4 R-Design is incredibly good but it has to be said that the active damping suspension option plays a huge role in mitigating the rough ride from the sports suspension and the low profile 20″ wheels.  The orange carpeting might appeal to some, but thank goodness the test car was fitted with the black carpet option which I think is more appealing.

Expect Volvo safety bits and pieces like Pilot Assist, park assist (this car parks itself) blind spot warning, pedestrian & animal detection and forward + rear + cross collision warning. The latter can be a little pedantic at times, slamming on the brakes when you’re reversing out of a parking lot and a car comes past in the opposite direction.  It supposed you could look at this as a “rather be safe than sorry” situation, but it can be unnerving when you least expect it.

The Volvo Sensus infotainment system is quite simply the best in the business, with very little noticeable lag when shifting between screens and is quite responsive when interacting with the large 12″ portrait style touchscreen.  Add the Harmon/Kardon optional sound system, and you literally have a symphony in your car.  I’d be hard-pressed not to include the Harmon/Kardon sound system as an optional extra.

A nice addition to the cabin is the QI wireless mobile charging pad situated perfectly in the centre console, allowing quick and easy access to your phone.  It also caters beautifully for the larger plus-sized mobile phones.  There is also adequate storage on either side of the charging pad for keys, pens, wallets, etc.

The 2.0 Diesel D4 is pretty frugal delivering just under 9.5l/100km on the Urban commute with some heavy-footed driving, while dropping to a fantastic 5.5l/100km on the open road.  Our combined tests of urban and open road commutes resulted in a brilliant 8.0l/100km.

Sitting behind the wheel and pushing the XC40 to it’s limits is a joyous occasion with really good steering feel and none of the ‘waftiness’ associated with SUVs and that is thanks to the sports suspension keeping the all wheel driven vehicle stuck firmly to the tar, and in some cases, the dirt as well.

It’s a perfect blend between family sports car (read Volvo V40) and an SUV (read Volvo XC60) and will certainly bring the further competition to the Germans.  While I feel that the T3 might be a bit lethargic in terms of power and the T5 may not be the most economical vehicle around, the D4 hits the sweet spot with more than enough torque for doing any kind of overtaking, while using the least amount of fuel in doing so.

Disclaimer: Volvo South Africa provided a test car to me for 7 days with no expectations.  I test drove the vehicle in my own time and at my own expense.  This is a completely unbiased review based on my opinion of the vehicle.