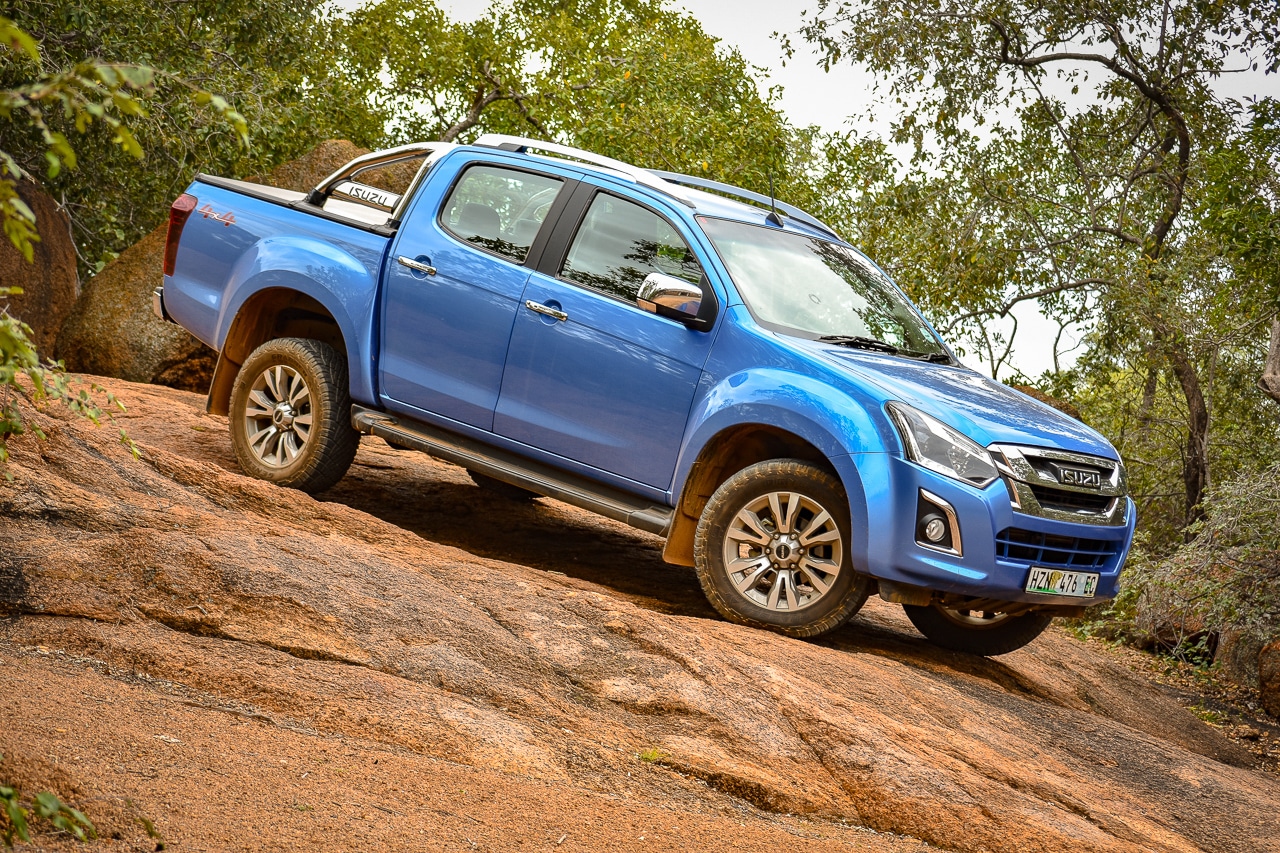 The Isuzu KB series has for a long time been one of the most sturdiest and reliable bakkies on the market and this new face-lifted KB300 is certainly no exception to that belief.

In order to test this theory, I took the vehicle on a weekend trip with my 28 week pregnant wife to the likes of Dikhololo Private Game Reserve in the Northwest Province, a quick 1 hour trip from Johannesburg.

The last stretch of road, about 13km or so is terribly undulated dirt road that hasn’t been very well-maintained.  In fact, so badly maintained the road is that on arrival at the Dikhololo reception we were greeted with a petition to the local municipality to upgrade the road.  That was some relief as even with the comfort levels of the KB300, those roads and a bakkie are just not a well suited pair for a comfortable trip.

Having said that though, the Isuzu KB handled the undulated roads well, never once feeling like the vehicle wanted to venture into the bush on either side of the road.  But you have to be reminded that this is a bakkie, and comparative to others in the market (Ranger, Hilux & Amarok) it still feels like a bakkie.

The interior is pretty decent, still having that rough and tough bakkie feel to it, so expect hard but good quality plastics.  The dash has been upgraded and now comes with a really decent touchscreen infotainment system and a full color TFT LCD screen in the instrument cluster providing all the information around the vehicle you need. Keyless entry along with a push Start/Stop button is now offered on the Isuzu range.  However the only disappointment in this regard is that only the driver’s door operates the keyless entry, which means the chivalry of opening the door for your missus requires a press of the button in the remote. Not a big issue, but a little annoying the first time you try. The seats are pretty comfy and supportive and you’d be more than ok sitting in the seat for prolonged periods.

The smooth and effortless engine provided in this KB300 is the tried and tested 2999cc Turbo diesel developing 130kW and 380Nm of torque which never skipped a beat on our weekend getaway.  Mated to a now aging 5-speed auto transmission, the gear changes are acceptable, but it still feels like it could be a little quicker and it could really do with an extra 6th gear which would help with long distance driving and keeping the revs and fuel consumption down a little.

Four wheel drive is an easy element to engage in the vehicle by simply turning the knob in the cabin and watching the 4wd icon light up on the dash, no need to bust a sweat trying to move the old-fashioned 4wd gear lever.  While I wasn’t able to do much in the way of any serious offroading, the few rock features I found as well as the odd mud/water crossings were made to look effortless as the KB300 simply acted as if nothing was there.

In my opinion, I really do think that Isuzu have nailed the styling with providing tough, utilitarian aesthetics that still look good in any Sandton parking lot.  The sleek nose is particularly definable amongst its rivals and leads the eye to the beautiful bulbous fenders art each wheel, and then neatened off at the rear with no weird angles taking away you gaze.  I pretty much spent a good hour just looking at every line on the KB300 while it was perched up on the rocks.

In conclusion, I would say that the Isuzu isn’t sitting at the top of the pile for the simple reason that I don’t think they have evolved the interior comfort as far as its rivals have to date.  It suffers from the lack of refinement that the likes of the Ranger and Hilux enjoy.  But what you are getting is a never-say-die utilitarian that will give you many happy miles.

Disclaimer: Isuzu South Africa provided a test car to me for 7 days with no expectations.  I test drove the vehicle in my own time at my own expense.  This is a completely unbiased review based on my opinion of the vehicle.